Almost three years ago I posted about a Spanish language version of The Squirrel Cage from Argentina's Billiken Magazine, titled Jopito Y Calvete. I've just found some more from a later period, but now titled Sansón (Samson) - their take on Paul Bunyan. These strips are from the mid-1940s, when Paul Bunyan had become the star of the strip. From what I can see, it appears that Billiken must have followed The Squirrel Cage right through Paul Bunyan's transformation from his enormous, superhuman self to the red-hatted gnome who would remain in Foozland for the remainder of the strip (as far as anyone knows, anyway!) Here's a page from February 26, 1945. 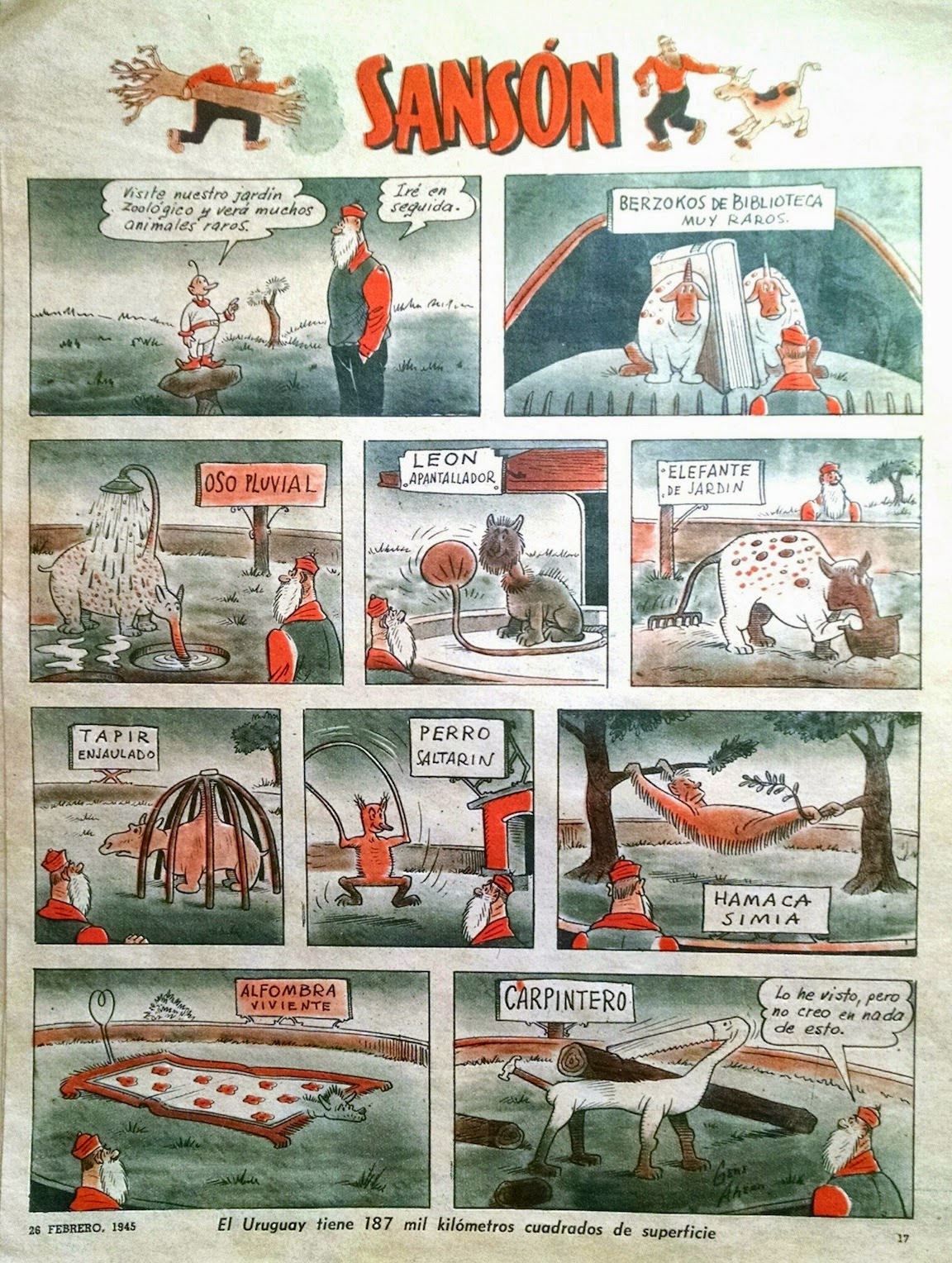 I love this one because it reminds me of Rube Goldberg's fantastic animals from the "Boob's Ark" story in his wonderful Boob McNutt comic strip. Sadly, I don't have this strip in English. I hope to find it one of these days! There are still many pieces of the Foozland puzzle missing… the search continues! More coming soon, I promise!
Posted by Carl Linich at 8:00 PM 1 comment:

Why Would Anyone Leave Goonia?

The first Squirrel Cage strips I saw years ago were early Sundays featuring The Little Hitchhiker. Some years later, I came across some of the Paul Bunyan strips. I really loved them, but it wasn't until I discovered some of the Foozland continuity that I became truly obsessed. It's because of Foozland that this blog exists, and that I'm committed to tracking down a complete run of The Squirrel Cage.

Thus far, we've seen Paul Bunyan harassed by a witch. Now comes the bit of continuity that I have only in fragments... but as far as I know, Paul Bunyan ends up transformed into a little gnome and finds himself roaming through the magical world of Foozland, "... where wide-awake dreams happen." The Sundays Gene Ahern turns out over the next several years are pure flights of surreal fancy. Some of them really make as much sense as dreams. For me, this is the greatest appeal; for something to be wonderful and nonsensical in every sense of the word. We think of "nonsense" as being something silly or ridiculous, but we should also think of things that we simply can't understand or explain. So much of life is like this! We search for meaning, and what do we find? A sponge. But, oh! What a sponge! It's the delightfulness of Ahern's nonsensical Foozland that leaves me hungry for more - and also keeps me returning to strips I've read again and again. This is far richer for me than any gag humor because, even though I know there's really no "getting" Ahern's joke in the traditional sense, my mind remains locked on the ingredients of the humor. I hope you'll agree! Now strap in and enjoy the ride... next stop: Foozland!

This is from Dec. 26, 1943. We still have our original Paul Bunyan, but we see shades of Foozlandish things happening! I've mentioned the influence of Winsor McCay, but I think Ahern must also have been paying some attention to Otto Messmer's Felix the Cat, which was often wonderfully surreal.

July 22, 1945. Paul Bunyan is now the gnome. The Little Hitchhiker has returned, evidently feeling quite at home in Foozland.

December 9, 1945. The recurring theme of places where no one wants you.

I have the fewest examples of The Squirrel Cage from this late period - it probably wasn't running in many newspapers by this time. What has happened to the Paul Bunyan-gnome? A few observations, based on all the strips I've seen: First, after his transformation, he is never called Paul Bunyan again - or any other name, as far as I've seen. Second, although he seems always to be searching for the way out of Foozland, I don't know that he ever leaves. It seems clear that the latest strips I've seen (from 1952) still take place in Foozland. Third, it seems that in the late 1940s Ahern shifts the focus once again to the theme of everyone wanting to get rid of The Little Hitchhiker. I'm very curious to see what the final Squirrel Cage Sunday strip could be... somehow, I'm hoping it will end with our bearded icon finally getting the ride he's been thumbing for for so many years.

And with that, I will close for now, but once again I will say that I'm searching for more strips, information on Gene Ahern, letters, photos, family contacts... anything that might be useful in researching this forgotten gem. If you have anything that may be of use, even if it's just a suggestion for places to inquire or search, please contact me! You will have my utmost gratitude! Thanks & more to come!
Posted by Carl Linich at 8:43 PM No comments:

Paul Bunyan's superhuman feats pushed far into the realm of fantasy, but he would soon find himself in a world where he was no longer in control of the magic. Appropriately, it seems to have begun with wands. This hearkens back to the period years earlier when The Little Hitchhiker gets hold of the magician's wand and gives everyone else a hard time. Ahern realized that with magic in the mix, anything was possible - no explanation needed. The following strips are all from 1944, and introduce two new characters: The Goomy, a magical creature with a little wand that can work wonders for good, and The Witch, who seems bent on giving Paul Bunyan a hard time. The degree of surrealism is remarkable, and I honestly wonder if Ahern wasn't simply writing down his own dreams (or maybe someone else's) for the strip. We've seen nods to Winsor McCay previously, but now it's fully fledged; Paul Bunyan is entering the world "Where Wide-Awake Dreams Happen" - but unlike Nemo, Paul will never wake up... at least, not that we've seen, and certainly not in the last panel of each strip. Has Paul's reality become a dream, or vice-versa? Stay tuned! BIG changes are on the horizon.  I'm still tracking down these strips, so if anyone out there has any, especially from this period, please get in touch! Meantime, enjoy the ride...

Ahern drew all of these in half-page format. What this means is that some panels have been removed for the third-page format, which is printed here. Sadly, I haven't seen any half pages printed anywhere past 1943, though all of the original pages I've seen (as late as 1948) are still halves. I'm dying to know what was in all those additional panels!

"The road suddenly is changed into soft gum." Sounds like something a small child would imagine spontaneously when playing. This childlike quality is one of the most charming aspects of The Squirrel Cage.

The Little Hitchhiker Takes One on the Chin

Okay - it doesn't happen so often that a strip disables me, but this one did. I'm displaying it panel by panel, and then in its entirety at the end. A couple more follow, but this first is the killer. Enjoy! 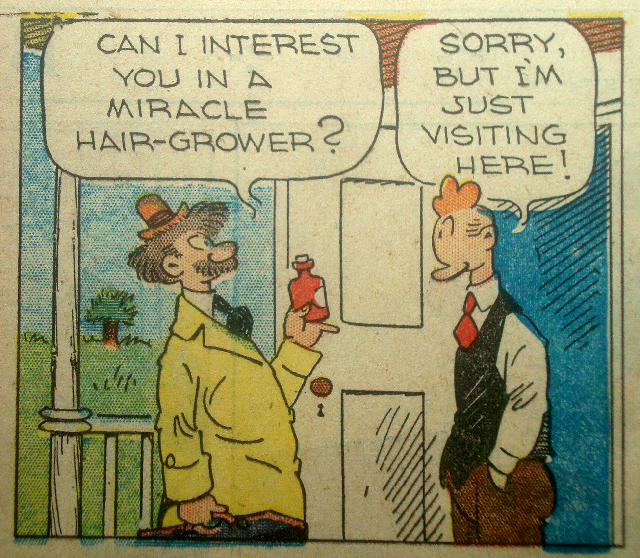 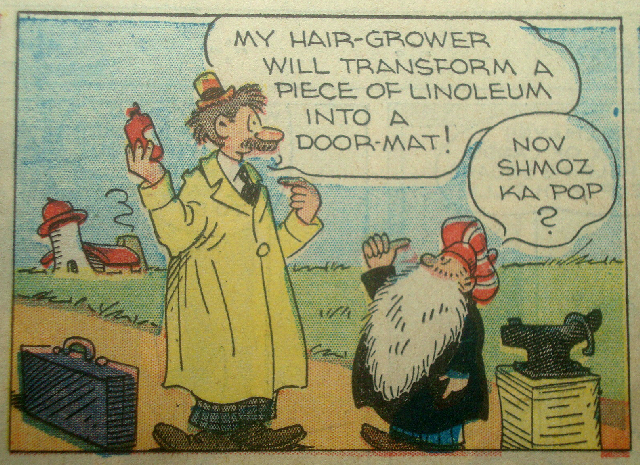 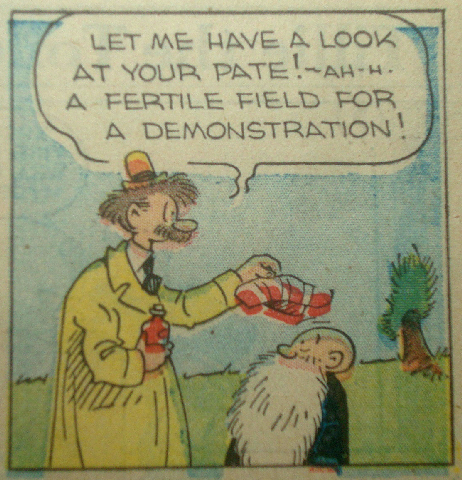 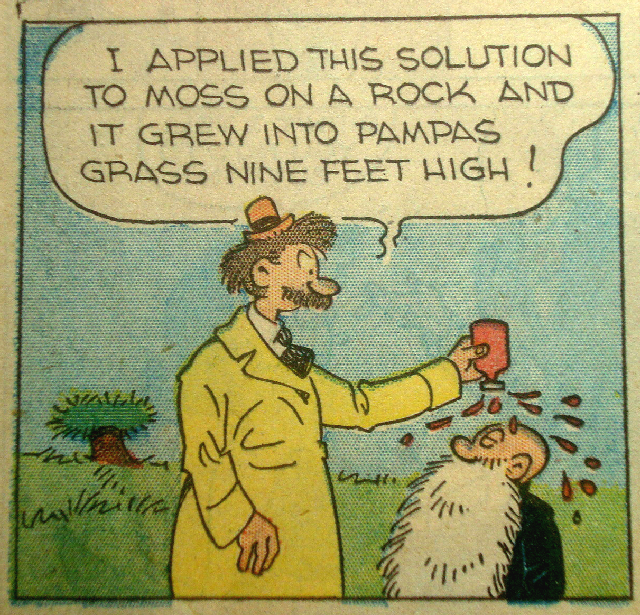 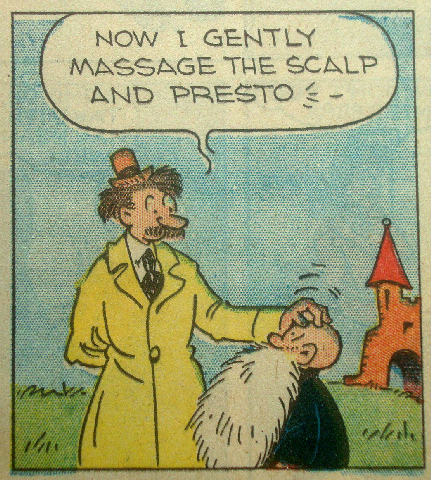 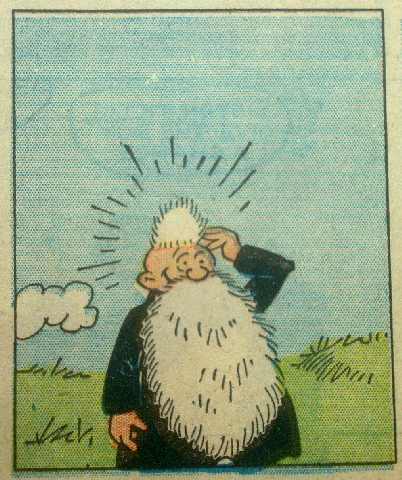 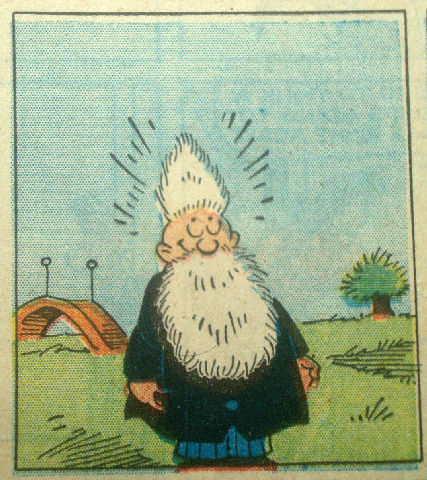 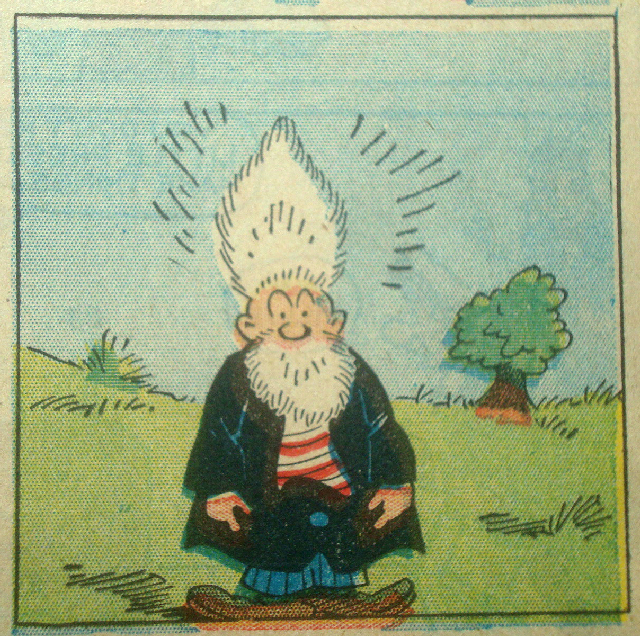 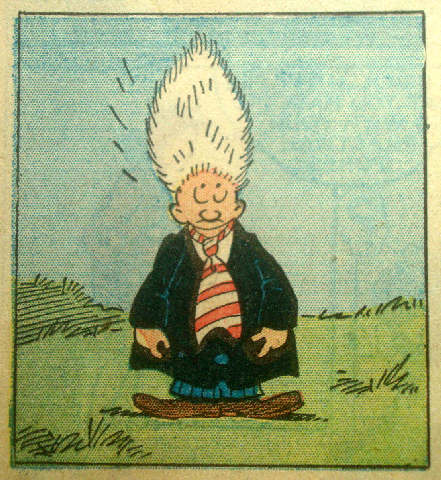 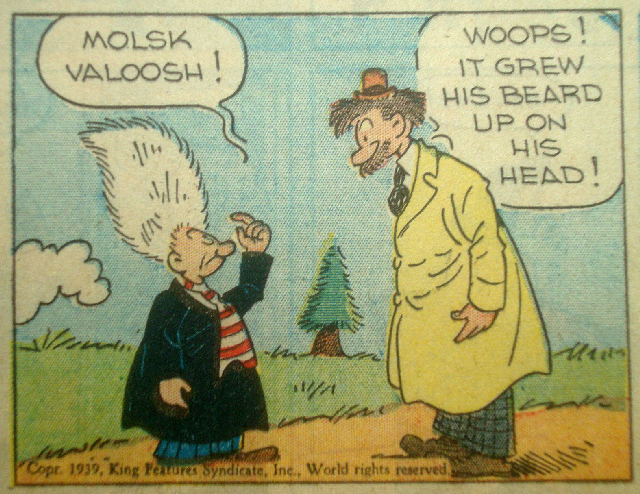 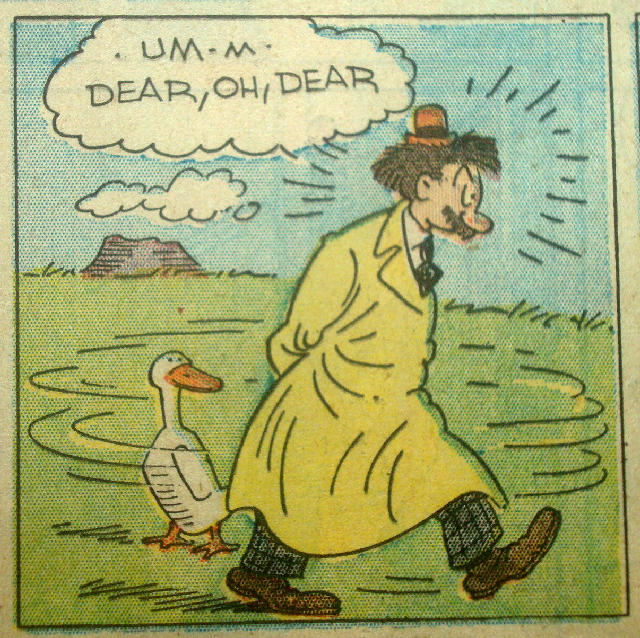 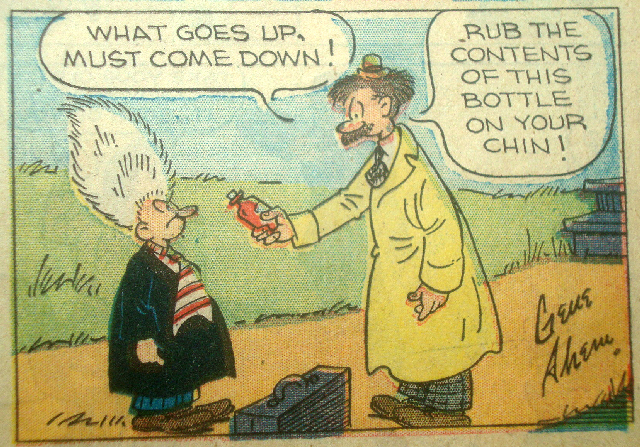 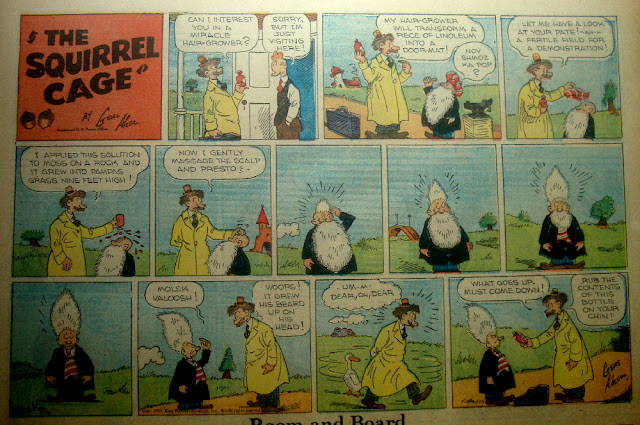 And now a couple more that I recently acquired. This first is especially interesting, as it's an example of the surreal in real life. 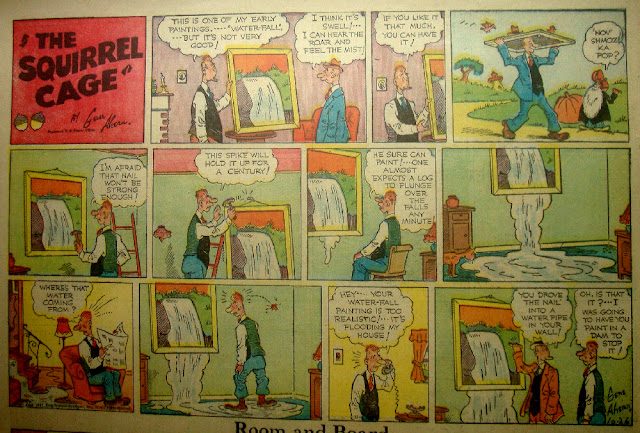 And next, our hero! I wonder who portrayed him in the film. Maybe it was that actor of actors, Wxzcslav Shneggkkhiwtcz. 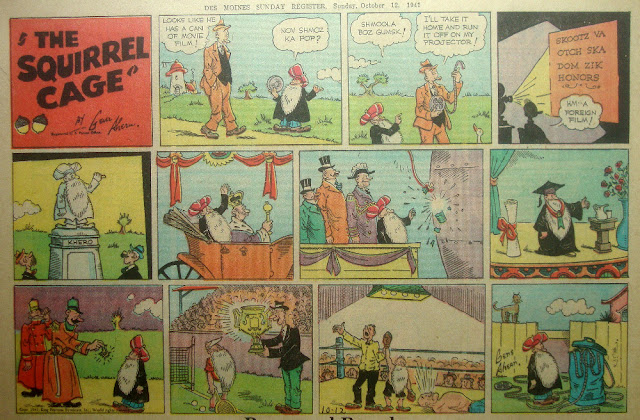 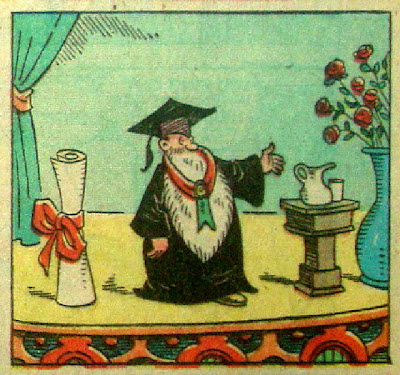 The collection of 30 Sunday Squirrel Cage pages from 1937 is once again available from Ken Pierce Books. Get yours here.
Posted by Carl Linich at 9:09 PM No comments:

Argentina's children's magazine Billiken, named after a popular doll made in the US, was launched in 1919. It is still published weekly. Sometime in the 1940s, someone at Billiken decided that The Squirrel Cage would be a good addition to the magazine. I have no idea whether there was any actual licensing agreement with King Features, but The Squirrel Cage was indeed published in Billiken for at least a couple of years, given the title Jopito Y Calvete, reformatted to vertical, and in some cases, largely redrawn by another artist! I was quite surprised when I discovered this, and it may not have been a regular practice, but if you look closely at the first strip here (undated), you'll see that the lines are really not like Ahern's at all. 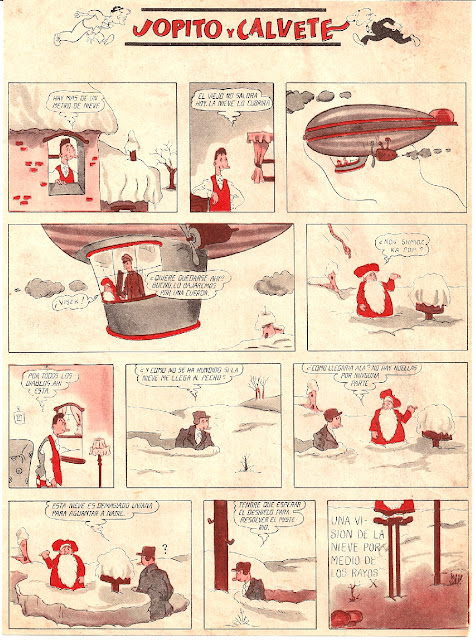 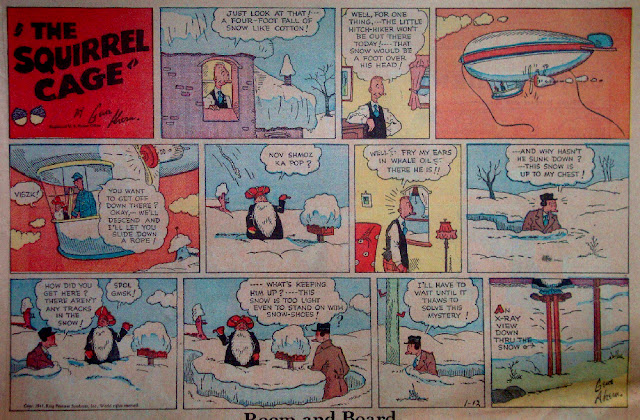 This next strip with Paul Bunyan, however, seems to use mostly Ahern's own art, with a few additions just to stretch the background to the edge of the reformatted panel. This is from a Billiken Magazine dated Sept. 27, 1943. 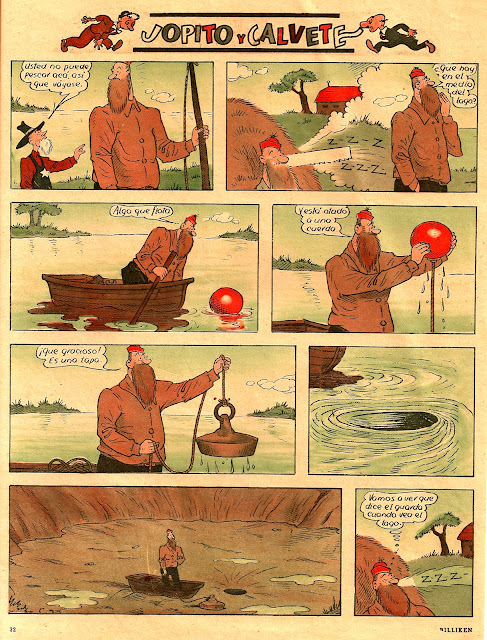 And here is the original half: 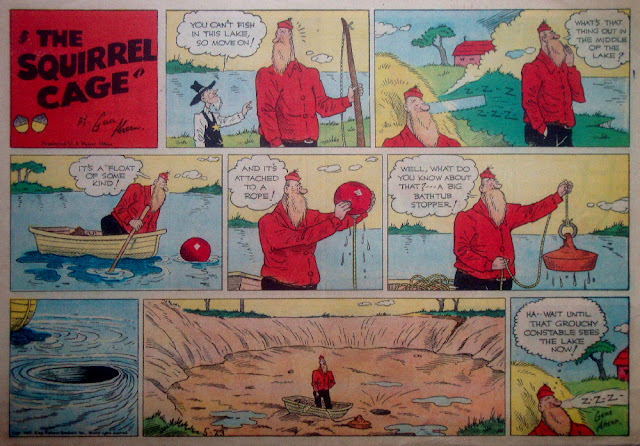 I have never seen any Squirrel Cage tabloid format pages in any US papers, and I suspect it never appeared as such, in which case these Billiken pages are the only tabs out there. If anyone has any more information about The Squirrel Cage in Billiken, I'd love to know when it started, how long it ran, and whether they published any of the Foozland continuity. Ah, Foozland! But that's for an upcoming post. I learned from Paul Tumey that The Squirrel Cage appeared in other foreign papers. Below is an example under the title Chifladuras.

Sorry it's so small! This was taken from a blog by Luis J. Lacourt, which you can view here. Although this strip looks like a daily, it's actually just the top portion of a Sunday page (you can see the lower panels peeking up from the bottom). Here's the Sunday in its 1/3 full page format.

I'd like to mention format. It seems most Squirrel Cage strips were published in 1/3 full format after the mid-1940s. However, I have seen original art for Squirrel Cage pages as late as 1949, and they are all 1/2 full format, which leads me to believe that Ahern always drew them as halves. If this is the case, I wonder where those halves are... perhaps it was just a few newspapers that continued publishing The Squirrel Cage in 1/2 full size once it lost its topper status. Speaking of which, that's another remarkable thing about The Squirrel Cage: it started as a topper, but after most other toppers had been eliminated in the mid- to late-1940s and more papers began running separate strips three-to-a-page, many papers decided to keep The Squirrel Cage. I think this speaks to the popularity of the strip, and to the lasting appeal of The Little Hitchhiker, especially, who seems to be better remembered than Room & Board or Judge Puffle. 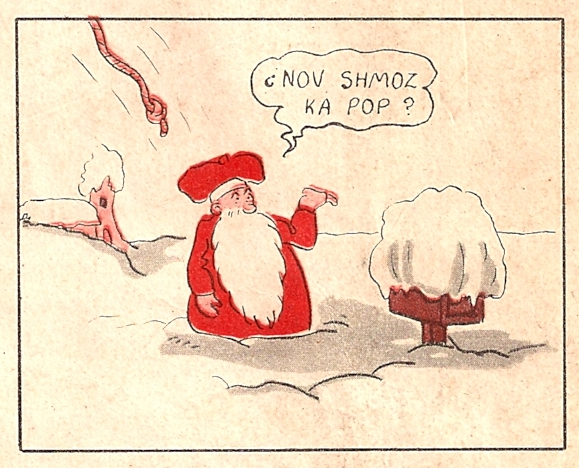 For more great Squirrelishness, be sure to check out Paul Tumey's Screwball Comics blog!
Posted by Carl Linich at 10:19 AM 3 comments:

Carl Linich
GEORGIAN FOLK MUSIC: I began studying Georgian folk music in 1990 when I joined an American choir called the Kartuli Ensemble. In 1994 I started a trio called Kavkasia with my friends Alan Gasser & Stuart Gelzer. We have recorded 3 CDs to date (see our web site: www.kavkasia.org ). I teach Georgian folk songs to all ages and skill levels, and am always looking for workshop venues. Please contact me if you're interested! I am based in Poughkeepsie, NY, but I will travel anywhere as long as I can get people singing. COMICS AND COMIC ART: I'm a fan of all comic art, and especially newspaper comics. My faves are The Squirrel Cage (Gene Ahern), Smokey Stover (Bill Holman), Jerry on the Job (Walter Hoban), anything by Rube Goldberg, likewise Milt Gross, Salesman Sam (George Swanson, C.D. Small), Polly & Her Pals (Cliff Sterrett), Krazy Kat (George Herriman), The Upside-Downs (Gustave Verbeek), and many more... I'm also a comic artist myself: I make surrealist cartoon drawings, and also transform real objects into 3D cartoonified thangs (especially furniture & clothing). Commissions are welcome! Let me know how I can help you get "Tooned Up."